We got the call from Cara Speller, long-time producer for Jamie Hewlett, to work on the Gorillaz MTV EMA 2005 performance in Lisbon. It seemed an almost impossible task. We were asked to work with Musion who had reinvented the 16th century stage trick ‘Peppers Ghost’, to bring to life the cartoon band performing with De La Soul apparently .in the flesh’.

Musion requires precision and we needed to fly a 10m x 4m ‘mirrored foil’ into place with millimetre accuracy from it’s position above previous act Greenday’s spectacular pyro. This alongside the 4 HD 18k projectors was a significant challenge, not forgetting the one piece drum riser back projection set up needed for Russell the drummer.

The fact that we were supervising the screens technical direction and playback for the rest of the show enabled us to integrate this extremely difficult set up into an already complex run order.

The playback was from a 4 channel HD EVS, with the backing audio coming from one of the video channels. The channels were split to the projectors via a Barco ‘encore’ screen processing system.

The next challenge for the 2006 Grammys show was to re-use the same animation technique, but with a performance from Madonna filmed and burnt into the animation so that the star appeared to be performing with the cartoon band. In a great piece of theatre, after the filmed piece had played out, Madonna then emerged from a sister stage in the same costume convincing everyone she’d been onstage with the Gorillaz ‘live’.

The complex staging situation meant we had to bury the projectors in the stage and rear project onto a rear projection .floor’.

We then had a nice rest at the Brits in London with a relatively simple single source HD playback to the largest 6mm LED screen ever seen at that time. 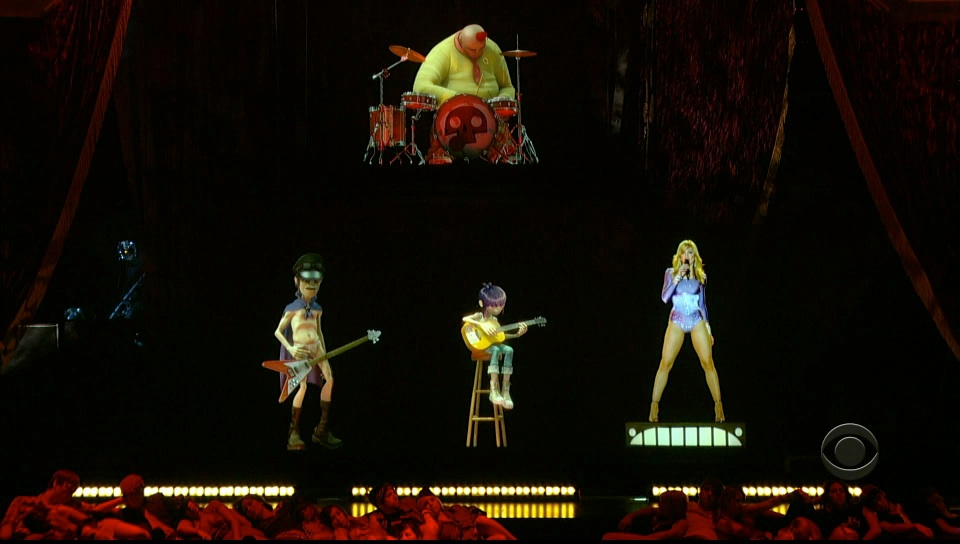 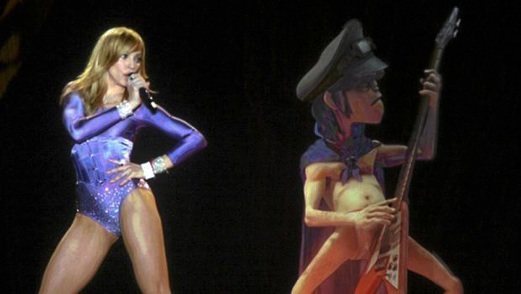