Roger Waters’ Incredible Us & Them Tour kicked off in spring 2017 and spanned 20 months.

[themify_quote]Roger loves a big, impactful design, so that’s what we set about doing. How do you jazz up such a mammoth video screen? Well, by turning the set into Battersea Power Station, of course![/themify_quote]Richard Turner, Lucky Frog 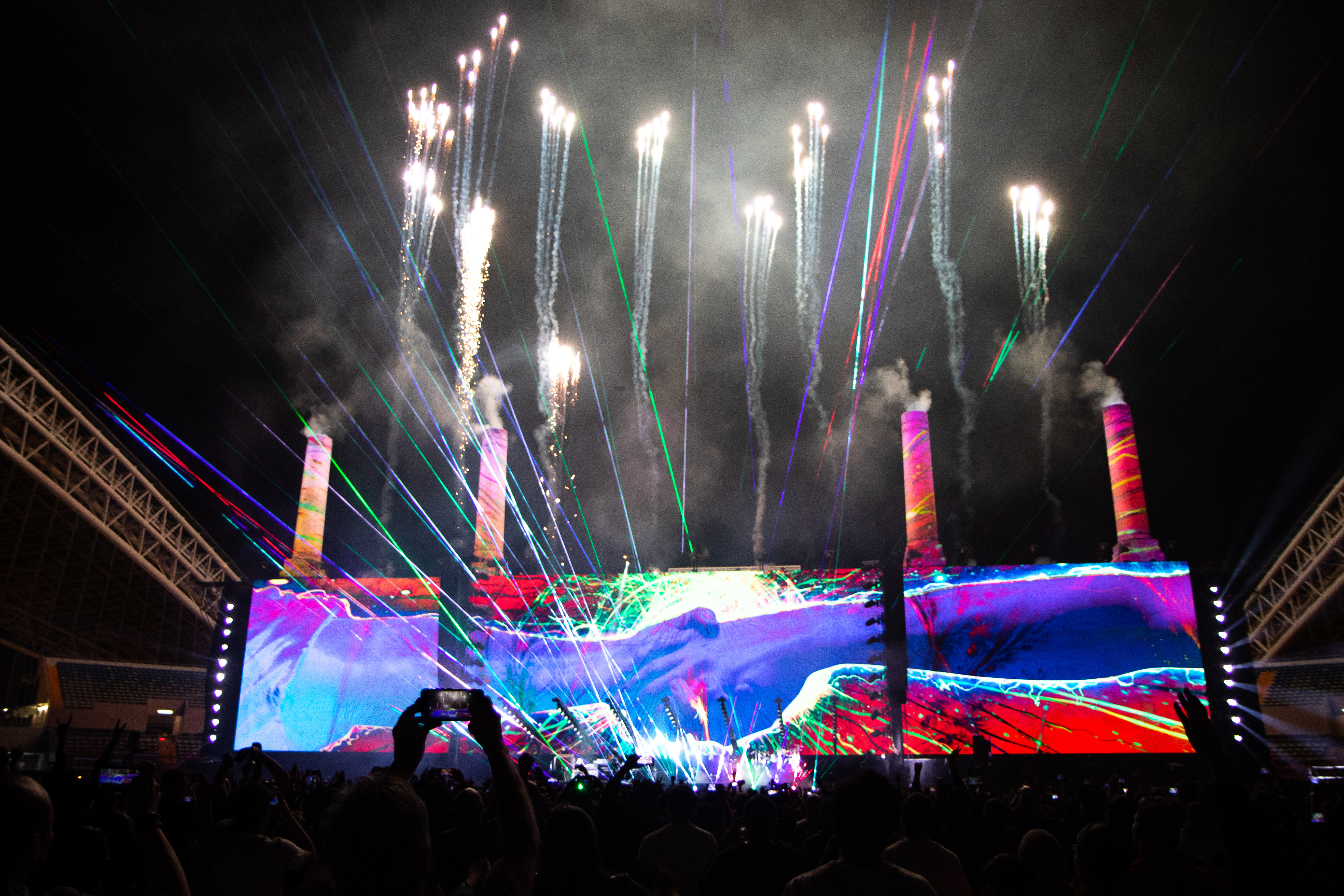 Both indoor and outdoor shows were designed to replicate Battersea Power station, and featured an incredible LED screen backdrop. The outdoor shows hid four Evention/Airwork designed and built inflatable cylindrical chimneys that ‘grew’ out of the set with real time mapping. The indoor set-up featured projection onto 8 Tait designed and built fabric roller screens stage left; 8 screens stage right and 4 inflatable smaller scale chimneys in the centre.  All were deployed along the middle of the arena directly above the audience as part of a spectacular reveal to open the second half of the show. 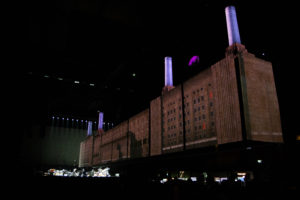 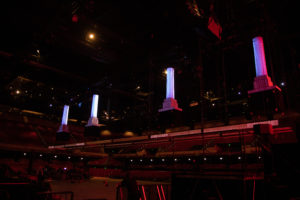 Each screen section had several carrier ‘wagons’ rolling along the vertical tracks, allowing the screen to be built from the ground up. This method ensured that each 7.5m section – and ultimately the whole screen – was held firmly in place and wind-braced from the start of the build to the completion of de-rig. This was necessary to minimise the risk of the screen sections turning into giant sails in the event of high wind! 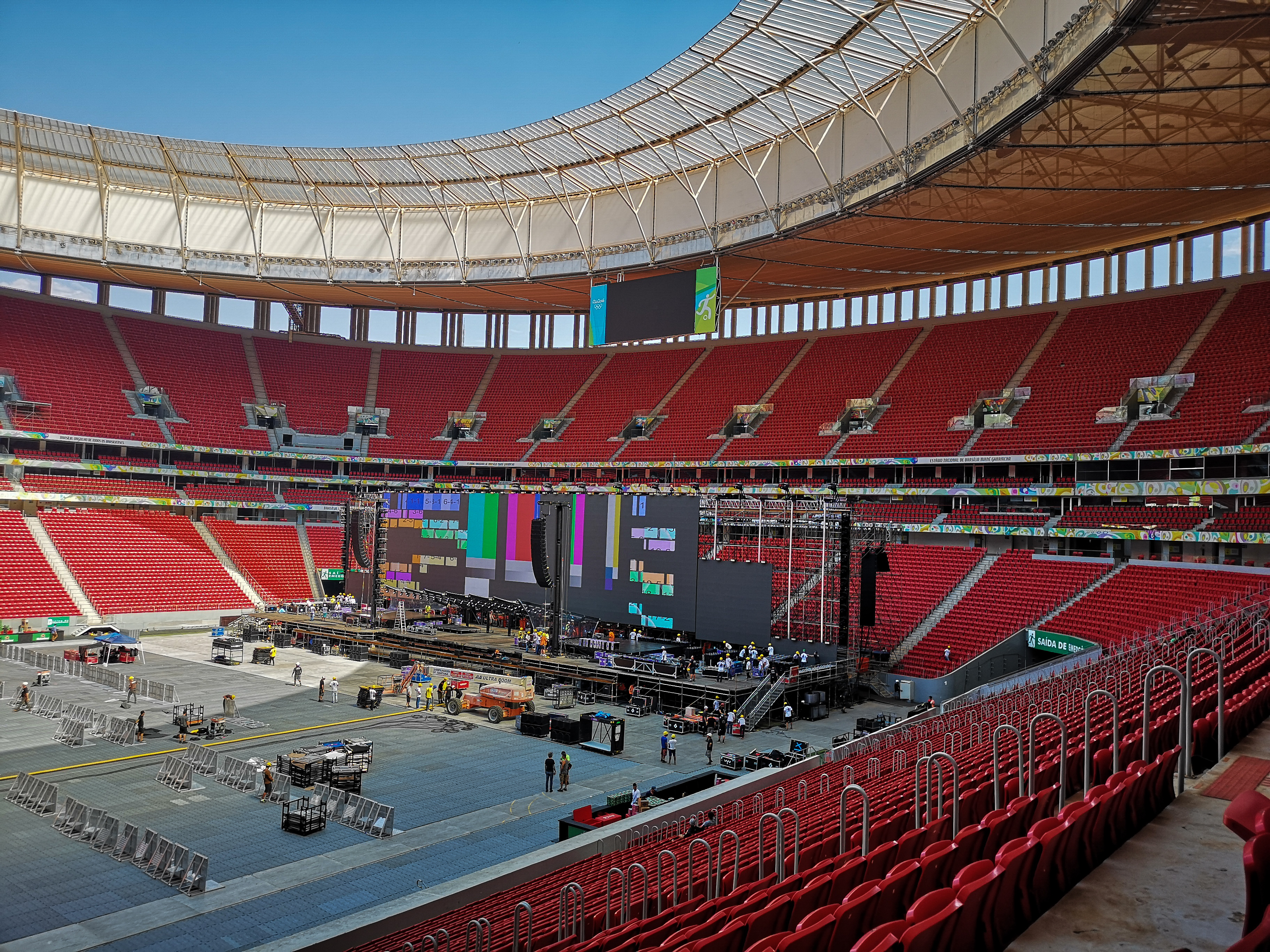 For Pixel wrangling and motion tracking, VYV’s Photon & Albion media servers were chosen. In total, across LED, Projection and tracking; 11 Photon servers were used and 49 Optitrack IR cameras. Enough VYV technology was transported to deal with both the arena and outdoor shows, re-configuring the system as the schedule demanded.

The indoor shows used 4 active servers and a back-up to feed the 21 projectors covering 17 roller screens and 4 indoor chimneys. They also provided both performer and inflatable pig(!) tracking data to the lighting department (headed up and designed by Pryderi Baskerville) to enable automated follow-spots.

The only way the projection line-up was possible within the time constraint of the build was because of the advancement of Photons SLAC (StructuredLightAutomatedCalibration). This projection calibration method has a dedicated Optitrack IR camera per projector (or stack of projectors). As part of the load-in process, strings of VYV Copernic balls consisting of an infrared emitter with retro-reflective coating are hung from the mother grid. The projector specific IR camera recognises the stepping stripes of structured light generated by the Photon calibration process as point reflections. The 2d representation of the 3d coppernic constellation from each camera or projectors POV (PontOfView) is how Photons math works out where and what shape each camera or projector pyramid needs to be.

“SLAC means all 21 arena projectors are volumetrically calibrated generally within 40 minutes. Photons multidimensional maths works out the 6 Degrees of Freedom position of the projector lens, taking into account other parameters such as aspect ratio, lens shift and distortion to build a very accurate model of the lens pyramid shape as well as its position in space. As long as an objects position and shape is correctly defined within the calculated cone, pixel accuracy projection is achieved even if it’s moving”, explains Richard Turner

The roller screens housed copernics in the bottom corners which specifically positioned tracking cameras would read, to recreate the screens position in 3D space with the projected image ‘sticking’ to the screen surface as it moved.

The outdoor shows saw 14 projectors cover 4 ‘chimneys’ with 3 blended projectors for each chimney giving 180 degree coverage. The two remaining projectors were overlaid to map onto ‘Algie’ the inflatable pig. In order to cope with the elements and the lack of rigging points, VYV copernic balls were integrated into a carbon fiber frame “the constellation”. Custom waterproof projector housing designed by Peter McKenzie of Qnetik enabled the projectors to be positioned and locked into place pointing at the constellation. 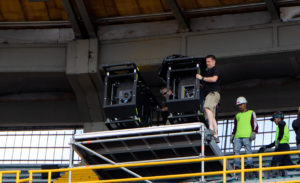 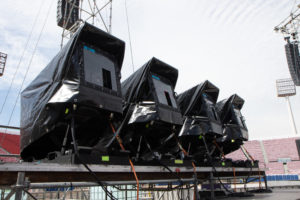 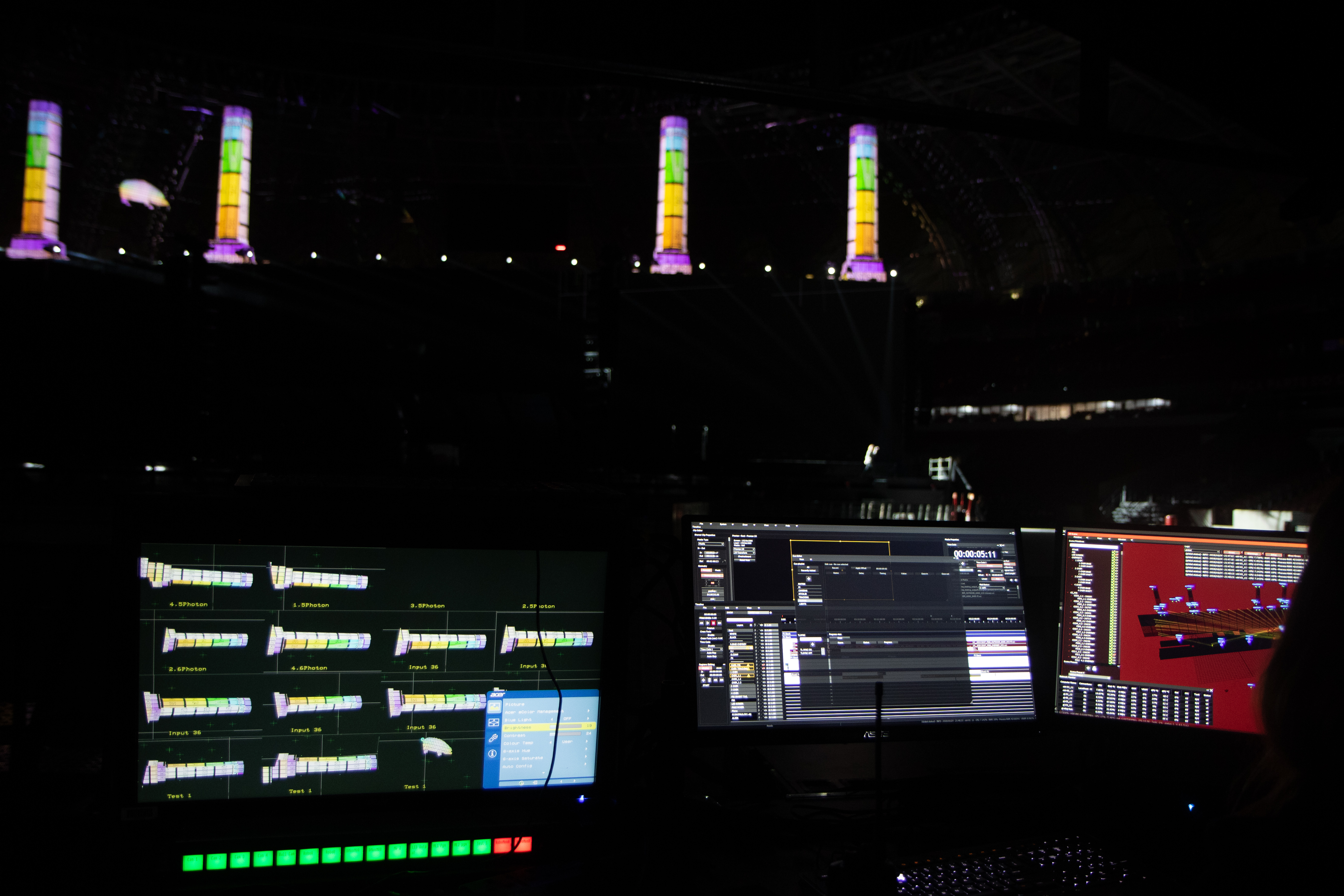 Hitachi SK HD 1200 cameras were input through the powerful SAM Vega 400 series router and mixed using a combination of the SAM Kula desk and direct router switch cues from Photon.
Much of the cuts and shots were choreographed to compliment the content so IMAG became part of the graphic artwork.

How does the Richard sum up the most challenging role of his career to date?

[themify_quote]“Fucking great – it’s as simple as that. If you work in projection and video, who on earth could ever ask for more. This rig is like a great big toy…  every day I feel as though Roger has let us play with his huge train set. To be part of the realisation of his vision over the course of almost the last 20 years has been a huge honour and privilege”[/themify_quote]

[themify_quote]“It was definitely the best six months of my life, so far. It was really hard work and long hours but I learnt loads, met some very special people and got to see some amazing parts of the world” [/themify_quote]Old hand Ellie Clement who shouldered lot of responsibility for the smooth running of the tour said her highlight was “getting home at the end of it”  but we think she was joking (?)

Roger Waters ‘In The Flesh’ tour kicked off in 1999 using large format PIGI scroller projection operated by our good friend Andy Joyes. It creates a great image, derived from a 160mm slide film, however it’s fairly inflexible in terms of changes.

In 2000 we performed a shoot out between the PIGI projectors and a pair of the latest available Barco projectors doubled up. The brightness was comparable, but the flexibility offered by content played back from video persuaded Creative Director Jonathan Park, to opt for a video based solution.

We specified and designed the video playback and projection system and then worked with Roger and Jonathan to migrate the original slide artwork into the software package; Adobe After Effects and then animate and combine the original footage with additional video clips to upgrade the show. 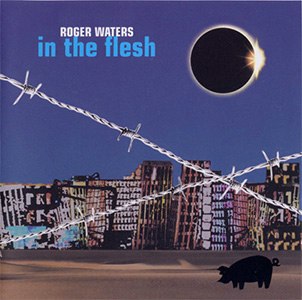 ‘Ca Ira’ – Roger Waters’ opera premiered in Rome in 2005. We looked after projection and HD playback.

The content had been created in video form as a series of stills timed to the ‘album version’ of the recording, we elected to use an EVS high definition slow-mo machine for playback. This enabled us to slip and slide the video playback to the naturally variable tempo of a full orchestra and choir.

An interesting show ensued with Creative Director, Sean Evens following the score, Richard listening to the soundtrack from video and slipping the video ‘DJ style’ and Roger pacing up and down a few feet behind us! 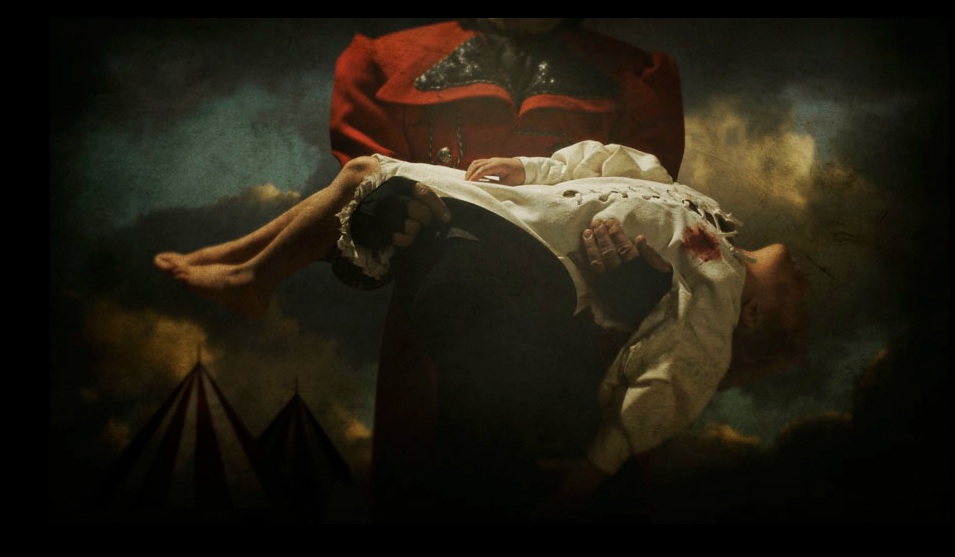 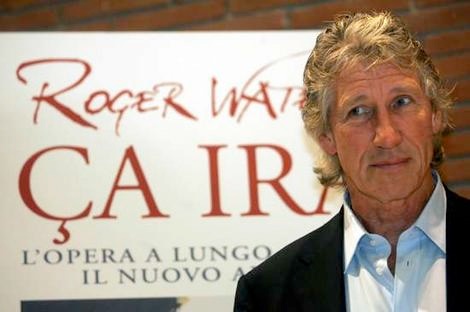 The best live projection show there will ever be. We’re sure of that because whilst others may spend more, or be bigger and brighter, no-one else will ever put the love, thought and attention to detail into a show as Roger Waters has with The Wall. It’s his life’s work; a great mind working for over 30 years on the same piece of communication.

The first call on this one came from Creative Director Sean Evans in November 2009 as Richard was passing through New York on tour with Miley Cyrus. Richard had worked with Sean on the Rome premier of Roger’s opera Ca Ira and the MTV VMAs at Radio City.

Richard went for a meeting with Roger, Sean, Kenny and Andy at Breathe Editing the day after Miley’s birthday party – so exact recollections of the event are a little vague – the gist of the meeting was that Roger had been told that bright, accurate projection mapping on the scale demanded by the upgrade he required to the original 1980 show was not possible. Our response was the usual – “anything’s possible if you can draw it, you have the money and the time”

We could draw it, we had the time and Roger wasn’t afraid to spend the money.

A significant amount of time was spent planning and testing in the months from Christmas 2009, concluding in an extended rehearsal period August-September 2010

We specified the video production process. Fortunately Sean and the team at Breathe were not overwhelmed by the 8560 pixel x 1620 pixel resolution that was necessary. They did have to buy a big render farm though!

We specified, designed and planned every aspect of the touring hardware… from the truly frame accurate 6 channel HDSDI playback system (including 6 back up channels with seamless switching and live masking for the brick build sequence)… to the custom built projector tripling cradles that enabled the projectors to travel as groups of 3 and facilitated a comfortable 2 hour load-in time… even the revolutionary custom DMX remote controlled shutters built by Tait Technologies that enabled us to perfectly merge the 5 areas of projection with 15 HD 20k projectors in less than 20 minutes.

No compromise in any of the design enabled the the largest most accurate touring projection system to work comfortably in a regular touring schedule.

At the end of the 2011 European leg a further upgrade was proposed; outside in stadiums, with a much bigger wall. Again we heard the “it cant be done’s” – but again we made it possible. Another sharp intake of breath at Breathe as the canvas increased to 15200 pixels wide, but again the time and the money was made available to scale up the systems to 10 channel HD playback and 36 projectors FOH. This made the 2012 Australasia/South America/US leg of the tour a sell-out success. Over half a million people saw the Buenos Aires shows alone.

We are superlatively proud to have supplied our expertise and equipment for this landmark tour. It will never be surpassed. 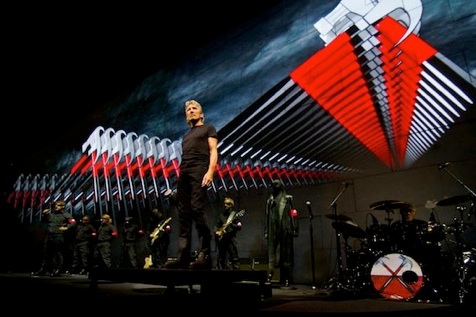 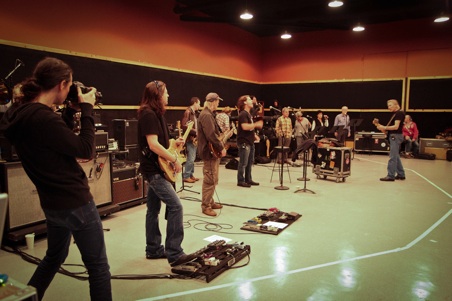 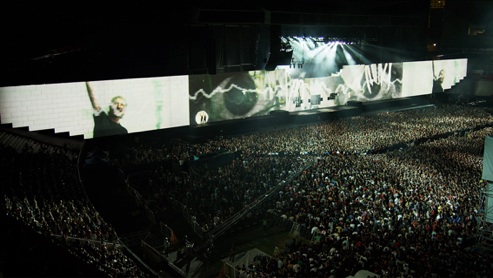 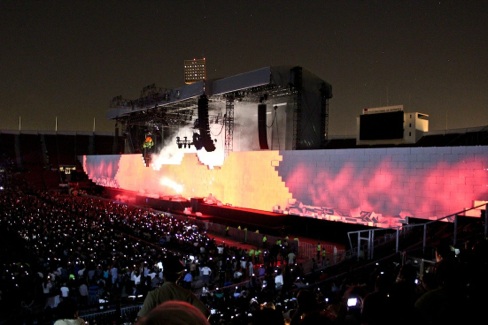 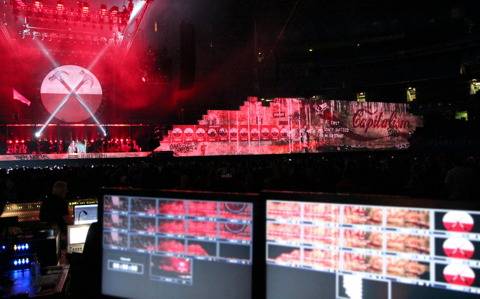 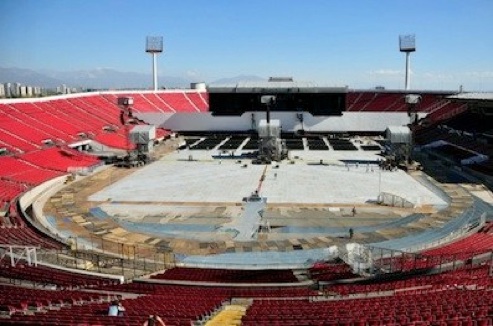